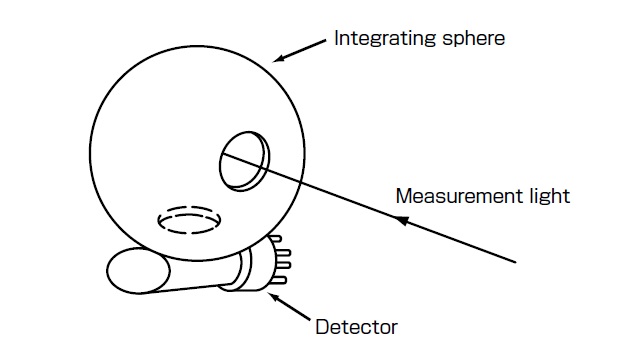 As shown in Fig. 3, baseline correction is performed without a sample present at the aperture of the integrating sphere. When there is an aperture on the reflection side of the integrating sphere, a standard sample (e.g. white board filled with barium sulfate) is placed at this aperture. In regular transmittance measurement, both the scattered component and linear component that have passed through the sample are measured, as shown in Fig. 4. To perform transmittance measurement of only the scattered component, place the sample with the aperture on the reflection side open as shown in Fig. 5. With measurement using an integrating sphere, the light intensity is 1/100 to 1/1000 as compared with measuring light received directly by a detector. So, noise increases when measurement is performed at the same conditions as when light is received directly by a detector. To reduce noise, the light intensity must be increased. This can be remedied by widening the slit on a spectrophotometer.